The Role of Demons 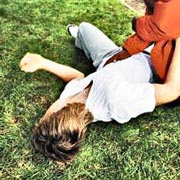 Sometimes demons play a role in sickness.  In the Old Testament Bible, we read of Satan's role in Job's disease, and in the New Testament gospels, we can see the part that unclean spirits had in the sicknesses of many people who were brought to Jesus.

Some people treat all illness and disease as though it was a demon, but Jesus did not do that.  It requires spiritual discernment to know whether a demon is involved.

Sometimes Jesus would command a deaf or mute spirit to come out and when it did, the person’s speech and hearing was restored.  The same was true with those suffering from seizures (fits).  Once Jesus cast out the demon, they were no longer afflicted with the seizures.

But other times, Jesus dealt with disease differently. For example, he healed one man by spitting in his eyes and laying hands on him.  “And they came to Bethsaida. And they brought a blind man to Jesus and implored Him to touch him. Taking the blind man by the hand, He brought him out of the village; and after spitting on his eyes and laying His hands on him, He asked him, ‘Do you see anything?’ And he looked up and said, ‘I see men, for I see them like trees, walking around.’ Then again He laid His hands on his eyes; and he looked intently and was restored, and began to see everything clearly." (Mar 8:22-25)

On other occasions, He simply spoke a word or touched the person and they were healed of blindness, lameness, leprosy, and all kinds of diseases.  For example, He simply said to a blind man, “Go! Your faith has made you well.” (Mar 10:52).

He healed all who were brought to him.  In fact, there were times when even after an illness ran it’s course and brought the person to an early death, he raised them from the dead.  He simply spoke their name and told them to arise.  He gave His apostle the same power from the Holy Spirit to do what He did.

So while demons do play a role in many mental and physical disease conditions, they are not always the cause.  Careful discernment is required in each situation to know when there is demonic activity involved.

Attribution notice: Most Scripture quotations taken from the NASB. Most other Scriptures taken from The Holy Bible, New International Version® NIV®, unless otherwise noted.

Author's note: This post is part of a series.  If you enjoyed it, you may also like the other posts in this blog available through the links in the side bar. You may also access my blog directory at "Writing for the Master."

Do You Want to Know Him?
If you want to know Jesus personally, you can. It all begins when you repent and believe in Jesus.  Do you know what God's Word, the Bible says?

Please see my explanation of this in my post called "Do You Want to Know Jesus?"

Len Lacroix is the founder of Doulos Missions International.  He was based in Eastern Europe for four years, making disciples, as well as helping leaders to be more effective at making disciples who multiply, developing leaders who multiply, with the ultimate goal of planting churches that multiply. His ministry is now based in the United States with the same goal of helping fulfill the Great Commission. www.dmiworld.org.
Posted by Len at 1:56 PM